Measuring neutrino mass is no easy task! Neutrinos are neutral and extremely light, so they hardly interact with the matter we encounter in our everyday lives. To “weigh” the neutrino, we take a radioactive source that undergoes beta decay, releasing an electron and an electron antineutrino. We can use the energy of the electron, which is easier to measure, to infer the mass of the neutrino. Read the sections below to learn more about the details of how this interaction is measured, and the progress that Project 8 has made so far.

More information can be found on the main Project 8 website and on our publications page. To find out we are currently working on at Yale, navigate to the current research page.

In a beta decay, both the electron and the neutrino carry off some of the energy of the interaction. At the highest electron energies, the neutrino mass will distort the shape of the electron spectrum. Thus, the neutrino mass can be constrained in a model-independent way by precisely measuring the spectrum endpoint. In recent years, the Mainz and Troitsk experiments have used this method to set an upper limit on the effective neutrino mass at 2.05 eV/c2 at a 95% confidence level. There are ongoing efforts, such as KATRIN, that use the same idea to extend this sensitivity.

The Project 8 collaboration aims to lower the upper limit on the neutrino mass to about 40 meV/c2, probing the inverted mass hierarchy, using a new approach to measure the electron energy. This is called cyclotron emission spectroscopy (CRES).

In Project 8,  we use the beta decay of tritium (hydrogen with 2 neutrons) to look for that electron spectrum distortion. To measure electron energy, we place our source in a magnetic field. When charged particles such as electrons encounter a magnetic field, they undergo cyclotron motion, moving in a spiral. This movement generates radiation that can be measured with antennas. The frequency of this radiation is directly related to the electron energy as described by the equation to the left (where f is the cyclotron frequency, B is magnetic field, e is the elementary charge, m is the mass of the electron, c is the speed of light, and K is the kinetic energy of the electron). Thus, a precise frequency measurement translates to a precise energy measurement, which in turn leads to a direct measurement of the neutrino mass.

The proof-of-concept stage for CRES, Phase I, involved trapping krypton gas (Kr-83m), a monoenergetic calibration source of electrons, in a small waveguide. A magnetic field of ~1 T supplied by an NMR magnet induced cyclotron radiation. In order to allow sufficient time for detection, a magnetic bottle trap kept electrons inside the detection volume. A 17.8 keV electron of Kr emits radiation in the microwave K band at about 26 GHz, which is very close to the cyclotron frequency from an electron emitted via tritium decay. In this experiment we observed single-electron relativistic radiation for the first time, shown in the left side of the figure below.

The next phase of the experiment (Phase II), which is currently operating at the University of Washington, has demonstrated CRES with tritium and upgraded to a higher energy resolution. It is also contained in a waveguide with magnetic traps to contain the electrons. The right side of the figure below shows a photo of the setup. This phase is currently running with tritium to gain statistics, and working on analyzing the electron spectrum and systematics.

Now that CRES has been successfully demonstrated in a waveguide, the next step is to scale up the technique to a free-space setup. This is referred to as “Phase III” and will employ a phased antenna array to look at molecular tritium decays. This is currently in the design stage, with much activity going on at Yale. The figure below shows a conceptual design of the volume, with patch antennas surrounded by magnetic coils. This will demonstrate a technology and reach a mass limit that is competitive with current values. Research is also underway across several institutions to design the atomic tritium source for the final phase of the experiment, which will be on a much larger scale and aim to reach a mass sensitivity of ~40 meV/c2. 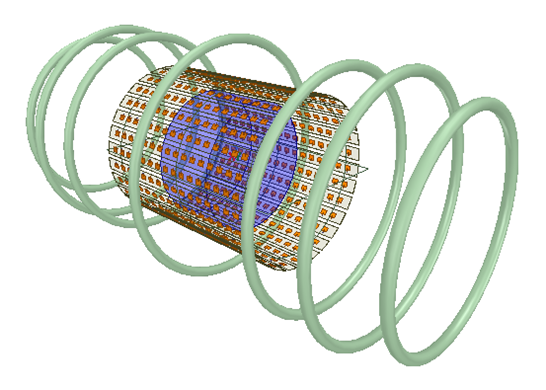